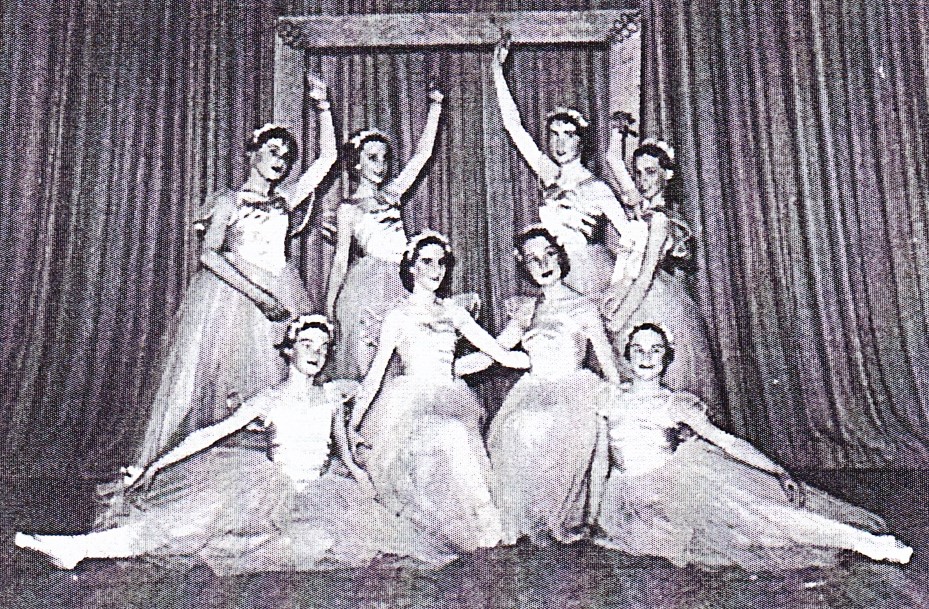 ‘BALLET IS COMING TO BOX HILL’.  This was the notice displayed in the Box Hill Junior Library by Mr CP Billot, the City Librarian and Coordinator of Community Activities.   Forms were available for those interested, to be returned to the Junior Library.

In April 1951 the inaugural meeting was held in the West Hall of the Box Hill Town Hall, with Cr KG McIntyre chairing the meeting, and Cr Padgham also being present.  Cr McIntyre outlined the plans of a Ballet School for Box Hill to the 200 people present, then a speaker from the National Theatre (Ballet School, St Kilda) gave a talk on Ballet and the Arts.

The first meeting of the Box Hill City Ballet Group (now Box Hill Ballet Association), was held on 11 May 1951 in the Auxiliary Room at the Box Hill Town Hall, and over 100 people attended.  Cr McIntyre presented the Constitution of the Group, then handed the Chair over to Mrs McIntyre to be the Group’s first President.  She introduced Miss Margaret Earl, who spoke on ballet and the need for such a school, and won the hearts of all present.  Ninety six members enrolled that night.

One month later classes were commenced in the Irving (Tennis) Pavilion, in Irving Avenue, with Miss Margaret Earl as teacher.  By early 1952 there was a waiting list to learn ballet and some 200 students taking lessons, so a move was made to the West Hall (in Box Hill Town Hall).  The Junior Library was also used for classes for a time.  Mrs Alma Wikman was engaged as the pianiste from the commencement of classes, and was with the Group for twenty years until illness forced her resignation.

The Council paid the first week’s salary to the teacher and the pianiste – thereafter it was to be run by a voluntary committee as a non-profit making organisaton, and because of this, any profits made from the Shows could be donated to local charities.  Some of these include: the Helping Hand Association, Box Hill Hospital (for a humidi-crib), Alkira, the Elderly Citizens’ Club, Handicapped Girl Guides, Salvation Army Red Shield Appeal and the Princess Elizabeth Kindergarten for the Deaf.

At all times the policy of the Ballet School has been to provide first class tuition in ballet at the lowest possible cost, and this is only made possible by the dedication of the teachers, who are paid by the Association, and the Committee, whose work is entirely voluntary.

The ballet classes started with about 50 pupils, increasing to over 300 in the 60s. Fees commenced at 30 shillings per term, plus one pound, one shilling extra for character classes. 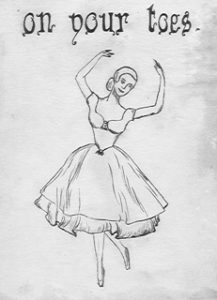 The official bulletin of the School was originally a bi-monthly publication – “On Your Toes” – which commenced in 1953, ceasing formal production in 1983.  Newsletters are still produced each term under the same title.

While not the first, one of the earliest logos for the ballet school, used from the early 1950s was a hand drawing of a ballet dancer in a traditional ballet peasant costume.  Around 1983 a competition was held for a new logo, being the logo the ballet school still uses to this day.

Awards (formerly Scholarships) are presented  annually to students who show promise and are consistently dedicated and hard-working.  The Scholarships were created in honour of outstanding committee members.  The original Scholarships were named after Mrs Ethel Geraldie, Mrs Ruby Wilshire and Mrs Meryl Laity who have given a combined total of over eighty years voluntary service to the Ballet School.  Additional Awards have been introduced in honour of Rhoda Collins and Esther Poelman, the latter award being funded by a bequest from the Estate of Esther Poelman, a former Council Representative of the Ballet School.

In 1965 the Group was asked to send a representative to a weekend seminar to mark the opening of the Cultural Centre in Shepparton.  Mrs Ina Bannister, who had been a long standing member of the committee, attended the seminar, together with Mr H C Lewis (City Librarian) and a Box hill Councillor, Cr Dave Youl.  Mr R. J. Hamer, the Minister for Local Government, opened the seminar, the theme being, “How can Local Government assist the cultural development of Australia.” Sir Zelman Cowan, then Dean of the Faculty of Law at Melbourne University, spoke on the importance of the Arts in Australian Life.

Mrs Bannister gave the history of the School (in 1965 the school had 330 pupils).  Sir Zelman Cowan said he was sure that the School was unique in Australia and congratulated Box Hill Council on their foresight.  Later, Mildura was to follow our lead, and since then other groups have formed similar schools.

Life Memberships have been presented to some Committee members who have been constant and enthusiastic workers for the Ballet School for many years.  Two School Principals – Margaret Earl and Jan Turner – have also been awarded Life Membership. There are currently 14 Life Members.

Our first ballet show was performed by the pupils in the Box Hill Town Hall on the 14th November 1952.  Highlights of the evening were ‘Woodland Frolics’ and ‘A London Street’, with the tiny children nearly stealing the show.  Other items were  a demonstration of the Cecchetti Method of classical ballet, a classical item to the music Chopin, ‘Trio’, and three divertissements – ‘Russian Dance’, ‘Tarantelle’, and a very vivacious ‘ Can-Can’.

The Annual Show is the highlight of the year being the culmination of the year’s work, and an opportunity for all to extend their skills in stage craft and presentation.  In addition to the show, students regularly dance for charity and as part of local festivals.

In 1978, because of the extensive renovation to the West Hall (which had been the school’s home for 25 years), classes had to be transferred to a church hall (St. Peter’s Anglican Church, next to the Town Hall), and a school hall (at Sion College).

Around 1980 the Ballet School moved into what is known as the ‘Studio’.  Located opposite the Box Hill Town Hall, the Studio is adjacent to the site of the original Box Hill RSL Hall; later the home of the Box Hill Library until 1973.  The Studio itself was the original Maternal and Child Health Centre, and later the office and staff rooms for the Library.  40 years on, the Studio is still one of the school’s main venues for classes, with the majority of classes held either at the Studio or the Box Hill Community Arts Centre.

Over the years several students have been successful with careers in Australia and overseas, with some students also obtaining places in the Victorian College of the Arts, and the Australian Ballet School.

“To practice, appreciate and extend the Art of Ballet in Box Hill.”

Excerpt from the Box Hill Ballet 40th Anniversary publication (1991) as compiled by Margaret Orange; updated and amended in May 2017 by Jo Mitchell & Margaret Orange.

Offering classes in Classical Ballet (Cecchetti), Jazz (SFD), Tap, Contemporary, International Dance and Wu Tao. There are classes for children, teenagers and adults that are suitable for beginners as well as experienced dancers. Whether looking to dance for fun, fitness, meet new friends, or looking for something a bit more serious, we have the class for you!

Box Hill Ballet is family friendly inclusive dance school, providing dance tuition in a supportive and welcoming environment.  We have been running for nearly 70 years as a not for profit organisation with a voluntary committee.  We have qualified and experienced teachers and there are various opportunities throughout the year to participate in performances.

At Box Hill Ballet we aim to promote and develop a love for dance across many different styles and all generations.